Yesterday we spent the day in Salinas, a larger city just south of Montañita. The city was dirty and filled with sky rise hotels. Unfortunatly there wasn´t much to be seen there. Worse off we spent a large portion of the day talking about the new board Jon was going to buy. It was in one of the shops here and we was excited. Alas, upon return to Montañita the board was sold and gone. Yet another board that Jon couldn´t buy. So the remainder of the day was spent talking with the Balsa House in an attempt to get a good price for a new, custom, board. We were told to wait until today to talk to Rusty.

We went up to the Mountain today to talk to Señior Rusty. Rusty makes the balsa boards. The shop is at the top of the hill and overlooks the entire bay. El Señior can tell when the surf is good simply by peeking out of his three story casita. His shop is just under his house. It´s about a 10´x 10´block of shade and that´s it. All his blanks and lenghts of balsa are every so gentily tucked in the rafters, the floorboards of the level above, of this open shop under his home. Jon and Rusty talked for quite some time as I attempted to listen and pick up as much spanish as possible, but moreso I enjoyed looking about at the number of different blanks he had out and tucked away. Some of the balsa boards are hollow inside making them lighter and better for competition, according to Rusty. The classic solid boards are equally good looking though.

The boards are laminated together with a paste made from rice and water – quite interesting, however, we were also told that he´ll use Gorilla Glue when he needs to put together a borad in a day. I suppose it all depends. So after some time, Jon negotiated a 9´2 board today for a good price and tomorrow we´ll return to the top of the mountian to start the shaping process, hopefully we´ll get to stick around to watch it as the board is extracted from the blank. 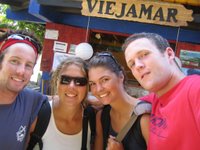 In other news our Canadian friends left town yesterday. It wasn´t more than 5 hours though that they were replaced by 3 California ladies, graduates of Santa Cruz. After many mohitos and beer I think we´re friends. Perhaps we´ll get to give more surf lessons today. 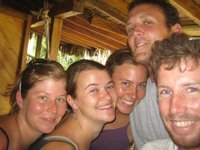 Our newly revised, curent plan of action is going to be stay in Montañita for another 7-10 days for the board to get finished and then out toward Baños and the Volcano Tupanatuo (the spelling is really of, the volcano that starts with a T and is hard to pronounce) to do our Organic farming and apparently enjoy some hot springs? I can dig it.

And that´s the story.