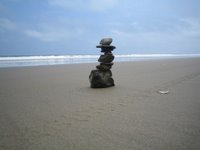 We bought a load of Internet time to use here in Montañita in the next 12 hours, so we´re trying to pound through it…. thus the frequent blogging.

Today we left town – which was nice. Jumping onto a bus south we traveled about 4 Km into a town that we´re not really sure what it´s called. It´s got a bust of Señior Bolivar and some signs about independence, perhaps I´ll note it when I find out what it´s called. After our bus hop we walked down to the beach to enjoy a vast stretch of sandy emptiness, save the sea life, little sand mollusk things and crabs. The sand mollusks were very interesting. I´m sure they´re a part of every oceanic environment, but this is the first time I´ve spend any number of minutes observing them. They have those little shells that we all know so well, the ones about the size of half your pinky finger nail? and they´ve got little arms that stick out like wings. They bury themselves into the sand and when the water recedes from the shore they open up the arms and catch all the yummy goodness of the sea – like grocery delivery, except no ice cream. After spotting one of these suckers in the sand we could look up and see them everywhere. Everywhere! They made up about 40 percent of the surface that we walked on. I almost felt bad, but then I didn´t. Jon and I then took a couple of subjects and placed them into a fanta bottle I had with me to conduct cultural experiments. First, are they social animals. The seemed to be indifferent. Second, are they active in just water. They were. Third, are they denser than sand. Again, affirmative. Fourth, do they react well to G-forces. They seemed to do okay, and in fact were more active than they were prior to experiencing the high force*. Fifth, would they succeed in a journey into the Earth´s orbit? This was one area where we believe we need to do more research as after their departure, weightlessness, and subsequent water landing and rescue, they were less active than before. However, we were unable to conclude whether or not it was due to the high stress environment or simply due to lack of sleep. Lastly, do they like to dance. After several dance sessions they creatures were, according to our team, healthy and happy. Following the trials the creatures were set back into the sea where they could resume their previous lives. We then moved onto land crabs, though we kept to observations exclusively.

Following beach time we walked through the small town to find a place for lunch and arrived at a small restaurant where we were greeted with a hand shake and told to go lay in the hammocks while they make our food. No sooner had we sat to relax we were delivered drinks, compliments of the house. I had a feeling this place was going to be good. The food came and went as did several more rounds of drinks that were wonderfully delicious, but the best part was the beautiful ocean breeze in the hammocks beneath the bamboo and palm leave palapas. I think we spent 3 hours there. 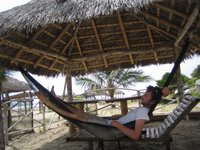 After lunch we caught a heavily congested bus back to Montañita where we saw our California friends, who promptly made fun of our daily adventures and then shortly after mocked our blog – I can only assume they were jealous of our manliness. Jon wrote a poem about the day and I encourage yáll to ask him to read it to you. As for me, I was the most relaxed I´ve been for quite some time. I want to build a palapa at my house in Tucson.