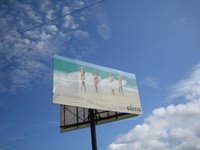 We finally made plans to leave Montañita and travel onward… just as we started to get to know this this new English Girl who moved in next door. Oh well. We hopped a bus, bags up top, and got to Guayaquil. From Guayaquil Jon was in charge and we headed south to Vilcabamba – a small hippy town filled with expats who are retired (Apparently there is an Astronaut living here). Anyway, we didn´t stay in Vilcabamba long. We bought some rice and veggies from the Sunday market and then hopped another, very crowded bus full of chickens, children, and far too many people, to Tuminuma, a very small village in the hills circa de Vilcabamba (about 30 mins on a really horrible road, which was recently washed out by rain.. I don´t know how we´re going to get back to the farm). The farm isn´t there. We arrived at Tuminuma in the afternoon and started walking in a direction that seemed correct. From this village we walked up into the Churisco Valley for about 40 min where the farm we´re staying at, Never Never Land, is located. The hike was easy, but the journey a whole other story. 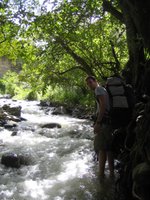 We were warned that we should bring rubber boots for river crossing, but really, who wears rubber boots – I´m American, I´ve got fancy hiking boots that cost more than a house. Needless to say I haven´t warn them since our hike up. The directions on the website for this place were a little vague and thus so was our trek. We went through gates and past forks, a little back tracking and contemplating, but when we reached the river we knew we were heading in the right direction – somewhat. That´s when it was clear I wasn´t prepared. We had to walk straight up the river. No river banks, no consistency in rocks. Just one wet foot after the next. Of course I made my dainty steps to preserve myself, but by the third step it was too late. Jon with his Teva´s ripped right up the river. After about 7 min of walking up stream we arrived at the much anticipated gate to the farm. There it was waiting for our arrival, a sign, the painted gate, the whole deal – then… locked. Disappointment only struck for 30 seconds and then we promptly hopped over both it and the gate.

We arrived at the farm, (http://chirusco.tripod.com/) met six people, four of whom where leaving either that night or the following morning, and had one kick ass dinner (fresh guac, fry bread, salad, and this yuca dish (not yucca)). The next day we had some time to get some work done, but more importantly we had a chance to look around. We learned that they recently acquired another piece of property and walking up the river was not necessary, rather we could have crossed the bridge – jerks. But to our delight we found fruit trees a plenty. Every day here I learn that there is a new fruit on the grounds. In fact, I think every plant here, aside from the weeds, is edible. There is coco, coffee, three veggie gardens, fruit trees, fruit vines, fruit bushes, chili’s… like I said, I´m still learning and it´s day 7 out here. The house is run like a little hippy commune not a farm.. in fact, I would never call it a farm unless I was refering to the fact that food is grown here. The owner is an American-Ecuadorian who moved down here. She´s really mellow and is just into people living there like it´s their own place. So we all cook and clean and work and eat and play and sleep and read and essentially live. There is no real farm work to be done here. We´re not plowing Fields or wrangling cattle, but I did collect about 5 pounds of coffee, scare some cows that we have (just two) out of a corn field, clear a field of weeds, build a gate, and clear some trees using none other than a machete (and a chain saw). For the most part though it´s raining a lot here and work can´t really get done while it´s raining, so we sit under the eves of ones of the houses and read and write and listen to music. The music is powered, as is everything else that requires power on the farm, which isn´t a lot, by a standard car battery that is recharged via two small photovoltaic. So, needless to say, sometimes we run out of power when it´s raining.

I think of ALL of you while I´m working or walking or sitting or talking.. it´s continual. It´s just too bad this environment is so far away from the states. I suppose there are similar places closer to us, I just need to seek them out. This isn´t the Ecuador of magazines or even of self guided tours of Ecuador. In fact, I´m not sure if this really is Ecuador. We drive and interact with Ecuadorians, we´ve talked to our Ecuadorian neighbors, the car, an old Land Rover (probably better than the one Dan drove in Africa, by a hair), breaks down and we take Ecuadorian buses and taxis, but really we´re in Never Never Land. And while on the farm, it´s a place removed and distant from any nationality. A fellow from a nearby farm comes to work almost every day, there is a 70 year old German exile, who lives on the land, the woman who owns it is from Virginia, and all the folks who come to the farm are global people from where ever you can imagine – though as it would be had, currently the two other volunteers are from, guess, Berkeley and … guess, Laguna Beach. So much for meeting exotic people. Good people though, for sure.

For sure an adventure is being had and stories are well on their way. We ate rabbit last night, the dog caught it, Jon almost lopped his thumb off, I now own a pair of fancy rubber boots (at 5.50 a pair, I couldn´t pass them up), and we´re burning plastic on an organic farm – go figure. I love it down here, but alas, I miss home and look forward to being back where I can quell my uneasy stomach with familiar food and toilet paper goes down the shoot and not into the waste basket. From Ecuador – until next time…. Ciao. Los Dos Jhons 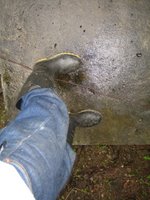