Once around the loop to see if she was standing out side and then into the parking lot. Found a cart and drove it through the doors of the lower level. I hadn’t see her for a year, so I was a little unsure, but I just shot for the best looking young lady standing around the carousel. She looked just like I remembered, about as tall as me, long dark hair, perfect Swedish figure, and once I saw her face – a wonderful smile and remarkable eyes… yeah, I suckered. I stood right behind her just for a second to make sure, mumbling a very vague sentence like, “Would you like a cart, mam?” She didn’t notice the first time. She pulled out here cell phone to send a message and then spotted her bag going around. She snagged it and set it behind her without looking then found her second one this time she looked up and I offered her the cart again, at first uninterested, she then smiled and recognized me. Hooray! Asa was officially in Tucson and as it turns out she didn’t need a cart – I hope someone else did, because I left it at the carrousel.

I didn’t know what to do. Just like most of my time since I’ve gotten back from Ecuador, I didn’t have any plans. I had heard that she wanted to see the Grand Canyon but knew nothing more, so now I had to incorporate someone else into my days which I filled with amateur construction and yard work in the noon day sun. I spent the whole drive home asking her what she wanted to do and discussing internally different options for the week, trying to figure out what we could do that wouldn’t bore her, scare her, or tire her too quickly, I think I did a good enough job, maybe. It went something like this…

….We got home and I gave her a quick tour. She was hungry, but willing to wait for dinner. I started to clean the house up – needing to finish some laundry and clean my room, I offered to throw her clothes in too and let her onto my computer to keep her entertained with Email and news and what ever else she wanted. Not the best way to start entertaining a guest, but I had decided to treat her like she lived there and perhaps that’d be the most genuine Tucson experience I could offer. Soon my room was cleaned, as was the yard, and the living room, and the back room, and by then I was sure she was bored. I thought of the stories she’d tell folks back home, “The US was fun but Tucson was Hot and Boring, enough said?” It scared me. I was thankful to get a call from Ryan and got energized for the evening and made plans for dinner. I don’t remember what we ate, chicken, I think… but we ate at the dinning room table. I felt like it might have been too fancy, given we never really eat there, normally. Then we went out to Ryan’s for games and drinks and to Applebee’s. This was the first example for Asa of the style of Tucson drinking, everyone ordered a round and some appetizers, then Peter began to act like a Terradactyl and the girls began to grope each other, Alex and Ryan talked politics, while Asa and I sat in the middle and took it all in. I felt like a party pooper, but at about 11:45 it was time to call it a night. Asa and I got home ready for bed and both fell asleep as quickly as the pillow touched our heads… well kind of. I later learned while sleeping in the back of the Volvo in the Grand Canyon, that Asa can’t sleep with ticking clocks near by, so she didn’t sleep too well that night – I took the couch the next night so she’d have a tick free environment. …. I’m so nice. Look at me. Look how nice I am. I like me, do you like me? You should.

Now to entertain. It’s morning, we ate cereal, I asked Asa what to do, but really I had already made plans the weekend previous and today was the day I wanted to start…Today. I asked Asa if she minded doing a little construction, of course she didn’t, and we went over to the lumber yard and talked to some people about spending $400. Asa and I quickly had the lumber stained and sealed and were on our way to figuring out how to proceede when Jon arrived and soon after so did Will. Together we marked out the yard and began diggin’. All of our minds melded, perhaps they actually melted because of the afternoon Tucson heat, in either case there was synergy, of some sort. We were rolling.

Holes needed to be about 2 feet deep and some came with 10 minutes of easy digging, while others needed to soak in water and be cleaned out with a spike and sledge hammer, a process that took no fingers that day, but several came close. We cut the posts down to size, about 9 feet from their previous 12-16 foot lengths, then sank the first post. We stepped back. Leaning back on our heals, arms crossed in front of us, we four students, we four non-builders, we four were now builders because there stood a sturdy square and righted 9 foot sealed redwood beam where no sturdy square and righted 9 foot sealed redwood beam stood before. How good were we. Good. Charged up we split and began working with gusto, Jon dug through caliche with his spike, Will quickly burrowed two feet deep into the soft earth, I gave recommendations and really did little, and Asa had the answer to all the difficult questions that arised, of which I now can’t remember. Once Jon left for the evening, we became aware of the time but were determined to set the remaining three posts. An hour and a half later they were done and we quite pleased with ourselves, once again. We now had four even square posts in my back yard. The first bit of hard-scaping I’d added since my drinking fountain addition about a year ago, certainly the most expensive since I’d moved in. Asa and I made dinner again, steak fajitas, watched a movie, and then to sleep, like I said, this time I took the couch. 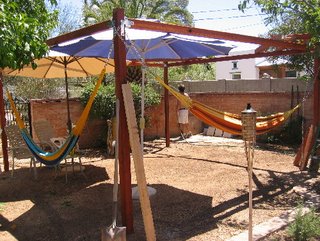 Morning arrived. This morning I made American Pancakes for Asa – they weren’t spectacular by any means, but managed to meet our needs and introduced a new breakfast to Asa. I just wish I was better at making breakfast. Together, with the hardware we purchased the day before, we were able to get the cross beams cut and up on the posts and Jon and Will showed up soon after, surprised at our progress, they were eager to get more finished. We purchased more brackets for support, more wood for the roof, and some hardware to connect some recently created diagonal brackets that Jon had created with Asa, kudos to Jon as before the diagonals were installed, the cross beams creaked and cracked and wouldn’t hold more than 120 pounds. We all put our heads together and erected the roof line, at this point Megan had showed up and helped us out with logistics. By the end of the night we had a solid looking, and feeing structure. Our Palapa was almost done. Rather than driving to the Grand Canyon the following day we stayed to finish the palapa, but that proved frivolous. We left Friday afternoon for the Grand Canyon, the palapa still as it was Wednesday night. Asa and I ready to escape the Tucson heat for some surfing.