The temperature on Friday was 111 according to a bank thermometer when we left Tucson, we estimated it at 120 as we drove, it was hot. Asa and I were soaking wet after 10 min in the car. Our stop into IKEA was a delight. The air conditioned lunch break was soon over and it was 3 more hours until it cooled off near Flagstaff. We were only one hour out of the Grand Canyon and dinner seemed like a reasonable thing to stop for. We were back on the road at dark and ready to watch for animals crossing the road. To our delight only rabbits and birds found their way onto the unnatural asphalt pavement while large game stood road side eating and watching. It was quite the site to have a mature elk 2 meters off your bumper as your cruise by at 60 mph.

I took Asa to the rim of the canyon in the dark. We saw nothing. We found a camp site and tucked our selves in for the night in the back of the Volvo. The analogue clock ticked all night. I found out in the morning about Asa’s discomfort around ticking clocks. She was tired when we woke up. 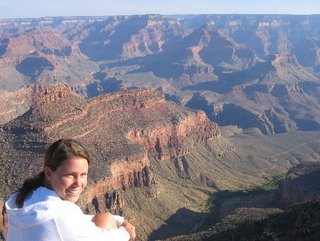 The Grand Canyon proved spectacular, as usual. Our shoes and lack of water prevented a hike down, but we enjoyed the walk and the sights, taking in a couple of condors flying about the rim. After we were satisfied with the grandiose glory of the Grand Canyon we hopped back into the car and got on our way to California. We drove down out of the high plains and hills and back into the heat, across the Colorado River and into the Mohave. We pulled up and were greeted by Andrew and Grant working on his lawn mower at 4 PM (ten till) as prescribed. I am so smart! 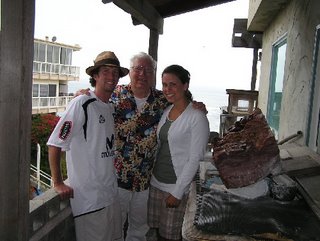 The morning came at about 11 AM. Not quite dawn patrol, but close enough. We loaded up the car and headed on down. I was ready, she was ready, the beach was ready… there isn’t a whole lot to describe the feeling of getting into the water after spending time in the Tucson heat, or even time away from the ocean, dreaming about surf. It was lovely. Asa did exceptionally well and smiled the entire time. The sky was clouded over but the water was about 69 F. After a session, split by one break in the middle we ate some burritos from Pedro’s and soon found ourselves back in Laguna. Lather, Rinse, Repeat. We did this for three days. One day finding a rip current to get caught in. The third day Asa was doing very well, was balanced on the board, could identify waves to catch, had no trouble handling herself, kept on smiling, and was standing up and rode down the line a couple of times. It was a success. It was sad to see her go on Thursday morning. I was going to miss my closest companion and friend, the pleasant smile, and humoring laugh from the last two weeks of my life. She’d be in Michigan and then back to Sweden. It was odd to think I’d just spend two weeks straight with this person, enjoyed her company, and then she’d be gone. Gone to never return. I don’t think I’d ever been in a situation like that, it was odd to think about. Perhaps one day I’ll arrive in Sweden and the game will be reversed. She was happy to be going home. I missed her.

Asa was gone, J.J. and I saw a movie together and then I went right back to Laguna and promptly fell asleep from exhaustion – for regardless of how enjoyable the last two weeks were, there was a lot and I was tired. I woke up the next morning. Asa had arrived in Michigan safely, I had caught up on my sleep, and I had spent the last four days at the ocean. I left for San Francisco that night. After all, World Cup started in the morning and I had to catch the first game at 6 AM. 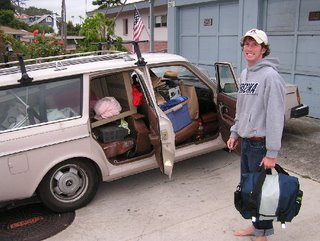