The United States played at 8 AM on Thursday. The books have been written, the United States Soccer team simply isn’t a contender for the World Cup, at least not yet. Even my all American McDonalds Egg McMuffin breakfast didn’t help them win and it certainly didn’t help me win.

After the game Jon and I went to his house to adjust and fix his parents back yard fence.. easy. We were done within two hours. We anticipated leaving for Vegas that day doing some camping that night and then rolling into Vegas Friday – it’d be a nice way to warm up to the time I’d spend away from home, away from Tucson.

I cleaned house and gave Sean the hi sign, expecting to see him in Vegas, the good bye was short. I never saw him in Vegas and he’s moving out next weekend.. tear. I suppose I’ve got to find a roommate soon, eh?

Jon, Austin, and I got in the car and made one last Tucson stop before leaving. To the Map Store! I love this store, it’s just full of maps and flags. It feels like it’s a throw back to the past, a travel center for kings, or the headquarters of the great explorers. The fellas who work behind the counter are the most knowledgeable individuals about maps and the such I’ve ever met. This store helps me to appreciate my high school geography classes and even more so the folks who may study geography as a life long passion.. it’s quite universal and I appreciate people who can help me get to where I want to go. 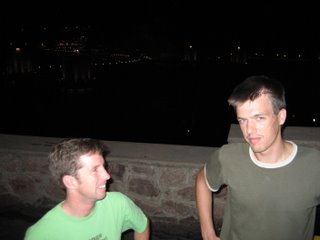 (Hoover Dam)
I had some ideas on where I wanted to hike. A place called West Clear Water Creek up East of Sedona, Arizona. To my dissatisfaction, and I’m sure of many others, there is a horribly vicious raging fire in the whole of Coconino County the area where most of the hikes and trees are in Arizona. Camping there was now out of the question. Spending a good hour looking at maps and talking to our new found map expert about some options, we landed on the idea we’d drive to Vegas that night and camp outside of the city at Mt. Charleston. The plan was solid, the route was easy, the drive was long.. it made sense. I bought some maps of New Mexico for my future travels and NOW we were on the road. To Vegas and BEYOND – for real. 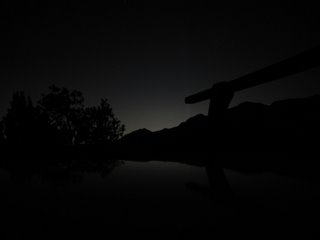 (Mt. Charleston, Las Vegas (N.W.))
The lights of The Strip began to blend with the Vegas city lights and then it looked no different than any other blip on the map. The sign told us to turn left, so I did. The sign said go 55, so I went 65. The signs didn’t talk about the dirt road I turned onto, but I took it anyway. Up a small hill onto a bluff I practiced power sliding around each curve. Austin was not pleased, Jon tried to sleep in the back seat. Neither of them were in the mood for fun – I can’t blame them. About 8 hours later we were within 10 min of sleep and here I was messing around, getting dust in their mouth on a cliff. Their attitude made sense, but hell, I wanted to practice using the E-brake.. I finally landed and nestled the Volvo into a spot among some shrubs and unpacked my things to on top of the car while Austin and Jon set up their blanket on the ground atop gravel and rocks. The woke up uncomfortable, while I woke up to a brilliant sunrise and then later the sun in my eyes and my bag 10 degrees too hot. It was 6:30 and time for breakfast. Vegas was beckoning our arrival.

The daily round of World Cup started at 8 AM so we had plenty of time to get to the bar to see the game – still we missed the first one. Driving down off the hill we first stopped into Albertsons for some pop tarts, a jug of milk, cereal, and spoons and milk. We ate on the sidewalk and quickly fell asleep where we were. Apparently none of us got the kind of sleep we had anticipated the night previous. Across form Good Will we stopped in for a peek and and sprinted to the Wynn, our place of residence for the weekend. Too early for check-in we planted ourselves in the sports book and placed bets on the upcoming game. I don’t know that I like sports betting too much, it raises my anxiety too much, takes away from the fun, from the game it’s self. I feel obligated to hate the other team because they’re going to cost me 10 dollars… it’s just not fun. 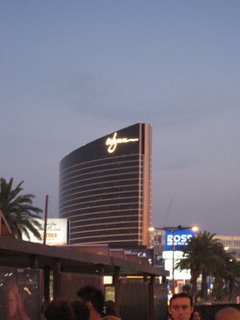 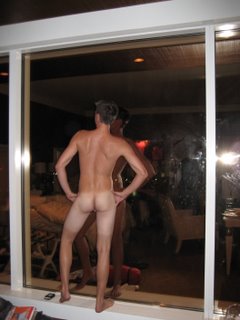 (Austin’s Bum – for all of Las Vegas)
I learned that in general, Vegas is boreing and people there make you feel insignificant. So when you’re there you drink enough to make yourself forget how bored you are and to make yourself feel better about the people who could care less about your well being. 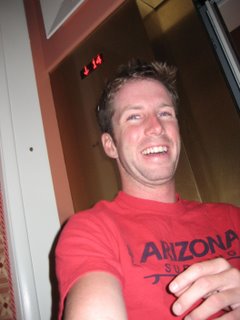 (Take a Guess What Floor We’re On)
When you’ve drank and smoked enough to make your self forget all the bad then you just feel worse because your body rejects all the garbage your putting into your system, you’re hung over, you can’t taste anything, you smell horrid, and perhaps you wake up in your own vomit, smiling like you a three year old. But hey, at least you may have had a good time last night, if only you could remember. 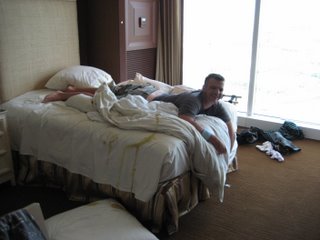 (Billy…)
I suppose that’s the Vegas allure – we go there not to win money, but to tell people we won money, we go there not to have a good time, but to tell people about the good time we had. And if we have to we lie. I was happy to leave Monday – sad to leave Jon, Austin, and Billy behind, but glad to be on my way home to see family. 4 hours later I was in Laguna Beach, an hour later in Mission Viejo eating dinner with Mom. Phew, I barely made it out of that place.