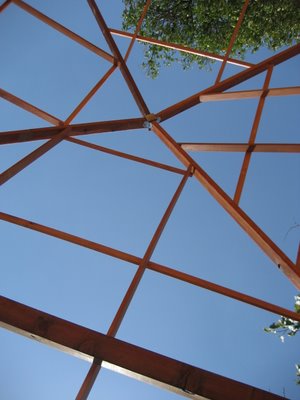 The Palapa when I had left was well on it’s way to being complete, thus I was eager to get it done and have some substantial shade in my yard for this horrid summer heat. We had hit a snag in construction design when Asa and I left town and we had gone swimming instead of figuring out the problem. After two weeks on the road thinking and dreaming about how to fix the problem I went with the simple solution, “it’ll fix it’s self. Just tack the wood on there and it will work. The Ecuadorias couldn’t have been that precise.. could they?” I got out my ladder and tacked the first piece of wood up, not a lot of measuring, not a lot of science, just two nails and a piece of wood that didn’t sit smoothly but held it’s ground. It worked, for the most part, so I put the others up too. then some of the cross pieces. I steped back and felt good about how it looked so I called Jon and Will and told them to come over and help me out. Jon was there in 20 min, and will arrived about an hour later. Jon and I, after a series of batitos we made, got the roof slats up and secured and looking good. Now all we needed were some palm leaves. 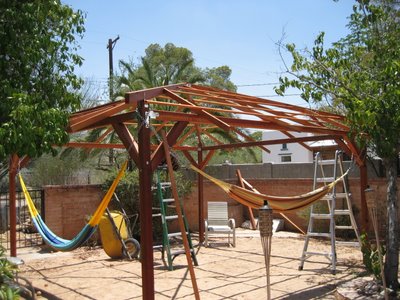 Freecycle started our hunt for palm leaves and people were very eager, in fact they still send me emails, to have me ‘trim their tree’ for them. I was excited to get some leaves and get this thing finished! We got on the road and the rain came down. HUH? The wind blew hard, the rain was huge, the streets flooded, and the lightening stuck all around. We pulled up to one house to get there frauns, unloaded the 7′ ladder, pulled out the 12′ extend-o-cut pole and tried our darndest to cut those leaves off. The rain drenched us, the stalks cut us, the wind moved us, and the lightening scared us.. this was bad news all around, what were we doing. Could we even use these leaves for the project, they seemed too dried and brittle.. eerrrrrrr.. We drove home. We got home and the wind had stopped, the ground slowly dried up. I sat on the couch.

This whole palapa expierence has certianly taught me a couple of things, one of which is “just because you’ve seen it, doesn’t mean you can do it.” The ecuadorian palapas looked and felt simple. there just wasn’t much to their construciton, a couple of beams, a number of nails.. bam = palapa. In reality, those beams are sunk into holes – we made ours 2 feet deep, stabbing through the tough Tucson layers of caliche. The beams are heavy, they are structural, they need to be secure – we used three different types of brackets to finally get our beams secure. The angles at which these beams reach each other is important, they looke haphazard in Ecuador, but they had do have done something to get them to fit together so well. And the palm leaves … I’m still baffeled as to how, where, what, how … I’ll let you know when I figure it out.