Pop, Dad’s dad, moved to California leaving his mom and three younger sisters in North Carolina. Pop regularly visits this coast and his sisters via the 40 and his 50 food motor home (roughly), alas we never ‘made it out.’ I suppose it’s tough enough to manage a family of six getting about town, to move them 3000 miles east for a week would be … a challenge and so for a long time I wouldn’t know much beyond the family that showed up to Pops for Thanksgiving and Easter dinner and street football games. A year and a half ago Dad died. Pop was making his drive again and told us this would perhaps be his last time driving the 15 day trek. His birthday is this weekend. Dad’s siblings were going to be there. This time there was noreason it couldn’t be easy. Mom asked all the brothers, gave us the dates, and without a hitch … or so I think, we had tickets to the coast and were on our way, I was going to get to the East Coast and meet a bundle of folks who knew Dad and Pop that I’d never met. neat.

Plane flights are plane flights. My flight to Ecuador didn’t feel any different than my flight to St. Louis and until we really hit wall of heated moisture in the air outside the baggage claim doors this time, I hadn’t yet put myself into Virginia and onto the east coast. Here there is green, there are trees, there is moisture flowing free from the sky, free in the Air! We found our white rental mini-van and soon after discovered that just because it has 6 seats doesn’t mean they’re built for people. Even my legs were pushed against the seat in front of me. Ugh. Fortunately we only had to drive 2 hours to the true coast to touch the water and then another 2 to Jamesville, NC 27846, where Pop and the family were already eating and drinking and smiling. 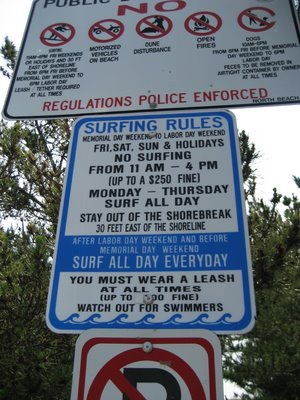 To the coast we drove. The water was warm, the sand interestingly granular and large, and the waves horribly non-existent. East coast waves, as I’ve been informed before and ten again today, only occur from hurricanes and, new to me, from Nor-Easters. Neither of which were present today. But there was sand and shore and I was indeed on the East Coast, cool. One more tick off my national summer tour. As we drove inland, away from the coast, we went over miles of bridge, which was cool, passed signs warning of Alligators, Bears, and Fox, which was interesting, and a whole lot of crops of Corn, which was .. well different. Little did I know I’d be eating some of that corn a little while later and it would be Gooooooo-oood, I mean good! Grant was driving by now and we meandered about the small roads, past a school and a church and houses all around and finally found Pops motor home. Here we go. 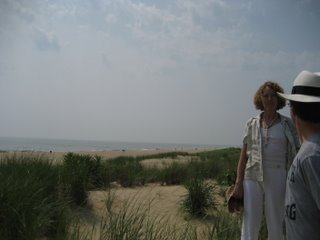 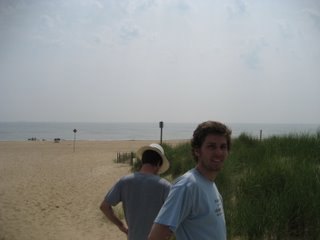 There he was outside waiting as a Pop should, resolute but independent enough that we’d quickly greet him before he had to wait too long. This neighborhood was quaint. It had a bold character to it. The lawns were green and soft, the trees years outside of their adolescence, the yard fence free and full of Fourth of July decor. Reminding me of another wholesome family event, we emptied out of the cramp micro-van, talking with Pop and beginning the indroduction to relatives. There weren’t too many, but more than I could remember the names of at that instant. As it is Pop’s three sisters and their families were fairly represented and all presented themselves at various points through the evening. We walked through the back yard of the first house to see the house that Pop grew up in and his mother had lived until she died, then just a couple of house up the street and across was another sisters house. Filled with chairs and tables this was the dinning hall. Pleasant with bird feeders and delicately placed nic-knacks. the house had that charm about it… the one that we try to repeat on the west coast but only find by shopping at target and k-mart. This charm was genuine, a true collection of novelties and toys over the ages. One particular squirrel feeder was a wooden piece secured to a tree with a stool and a pike upon which an ear of corn was placed. According to the residents, squirrels actually sit down and enjoy the corn – remarkable. There were white window trimmings and hand dipped candles along side an easy chair and broadband Internet connection. Against my previous notions – as lacking as they were – this place was welcoming, it was family, it was home. There were hugs all around, smiles from everyone, and one hell of a dinner. We were even introduced to a neighbor as “Kin Folk,” and that just made me feel all warm. Tonight we’re at the Days Inn – using their Wi-Fi – and tomorrow I look forward to getting another glimpse of N. Carolina and family, and evenings activities which include but are not limited to a good ole fashioned ‘cook out.’