Germany beat Argentina and they advance into the semifinals, Ukrane goes home.

Today we put Pop in the car, got some cheese biscuts and sausage from the local BBQ joint and got a quick tour of the land of our kin in North Carolina. 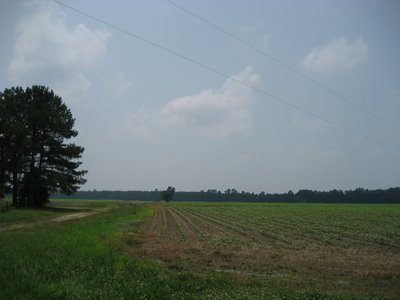 We drove past the Jamesville cemetary, saw some Mizells and a Mizelle. Pop told us that there was another Mizell clan when he was growing up. I can only imagine that they were ruffians, trouble makers who managed to move to Mexico and start a new life under the psudonym of Sanchez.
Past a heap of ready corn, nearing tobaco, and new cotton fields, Pop narrated to us shorts of relatives, friends, and events from his childhood and subsequent returns home. “Down that lane on at the end of that field was the local country store, that fella was so nice…. Right there at the corner of that corn field, this place was once all trees and the house was tucked away into them…That’s where I was born… This house use to be the best in the county. This is the first house that had gas lighting. …Mom grew up in this house.” Mom drove slowly and irratically as all of us passengers were half enthraled with the stores and history of the area and half scared Mom would drive into a corn field because she thought Pop wanted to stop there. Finally we turned right past a group of goats and found an old drive wih a farmer working the land and an old house in front of a series of barns and such. We were interested in the house. Unfortunatly I can’t remember the story – the history – but it was there. Perhaps I’ll add later. 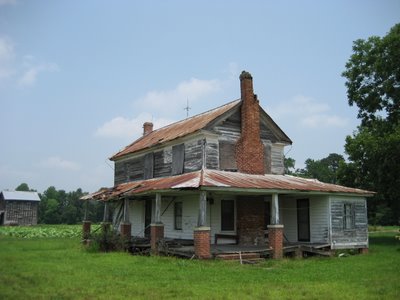 The house was old. Wooden. Tin roof. Brick fireplaces on both sides. A wrap around portch. Boarded up windows. Lightening Rods. Surrounded by damn green grass and fields of cotton and tobacco. …… 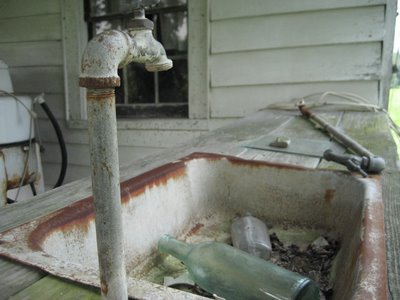 We returned to sisters where we set up tents, tables, and chairs for the evenings dinning and socializing in the damp heat of the east coast. I don’t sweat this much in Arizona – that sweet tea is fantastic for breaking the heat. A beer, traditional football game, and one injury later (to Steve, a team mate of mine) we were ready for a shower, grace, and burgers and beans. I was sedated and calm. A Carolina storm rolled in, the sun dimmed and disappeared, and the bats followed the lightening bugs into the evening air. It was pleasant. Andrew and Megan got a mason jar from Grant and we caught a few buggs and watched them in captivity. Andrew taught the kitten to hunt them and I enjoyed some time in the hammock. What day is it? It doesn’t matter. It’s Holiday. Tripp left to get Karen from the airport and we hitched a ride back to the hotel to await tomorrow’s meals.