June 21st. I got back from my time all over and was ready to work on this palapa! I just worked, no plan, nothing. I cut and nailed and by the end of the day I had something I felt like I could work with. It wasn’t fancy, but it was the beginnings of what looked like a patio cover. Again a ‘project point.’ I’d be okay with just a patio cover.. nothing too fancy. I didn’t need palm leaves.. though it would be nice.
The following day I called Jon up and we finalized the cross pieces for the roof and then started on the month long journey to find palm fauns to cover the roof, a task I had no idea how to complete. So we started at square one. Asking people. I sent out a freecycle message and got a number of replies within the hour. We’d be gone tomorrow for so we had to work tonight. Excited to get started we drove toward one house who claimed to have some low lying palms we could ravage. 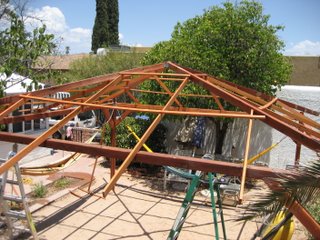 A mile from my house the storm broke over head and the wind pushed from the south. Push so hard that rain would enter Jon’s window and hit me driving, but if my window was open I didn’t get wet at all, save the splash from the passing vehicles. We got to the house that claimed to have trees and saw none, so we pulled up to a neighbor’s house, asked them if we could trim their tree in the thunder storm and got to it. Unfortunately I hadn’t brought all my tools. Expecting a saw to do the trick nicely we hacked and hacked at the dry leaves hanging down from the tree and soon resorted to simply breaking them off while trying to avoid the piercing thorns from the branches. The storm grew more fierce with every minute and soon Jon and I were standing at the back of my car under the tail gate waiting it out until we finally said “Fuck It!” and grabbed our tools threw them into the wagon and drove away with a handful of dry palm leaves in the back.

Though the car smelled like dates, the windows were fogged and I couldn’t see anything. After driving through the residential streets for some time without any ability to see where I was going besides light and dark spots I stopped to clean the window. To my amazement I had stopped at the stop sign denoting the major busy cross street. I marked that into my lucky book right next to not getting struck by lightening minutes earlier while standing atop a ladder waving a 10 foot tall tree trimming pole.

Jon and I retreated back to the house feeling half defeated. Tomorrow we’d be gone and the project would have to wait. 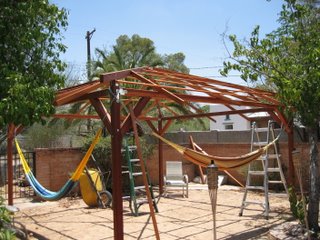 At this point I had also received a replacement camera so I could start taking gigs upon gigs of pictures of the work. This time they are not so fancy.