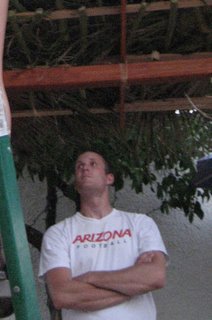 Jon: You may know this character from . He was the original guy to work with me on the idea of having a palapa in my yard, and he would say, “Yeah!” a lot of times. A busy guy with his own work, he is a damn hard worker here too and always appreciates listening to Snoop Dog while building and drinking beer while we’re not. Jon was the first to attempt to scout palm trees with me for the roof and found himself working a 10 foot cutter while atop a ladder in the middle of a thunder storm. He also provided his machete for the project. 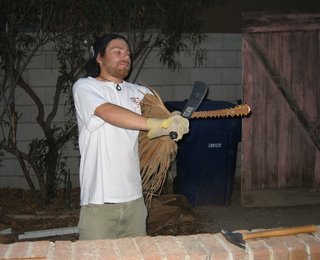 Will: This fella helped to turn that idea into a reality by volunteering all of his free time to the project, promising to wear his classic short shorts. With vision he’s the reason there are any frills on this thing by the end. During the construction period it would not be bizarre to come home and find Will lying in the hammocks constantly pleased with his work. Will also gave many miles with his vehicle to collect palm fauns and was the first to give word of the campus trimmings that allowed for the completion of the project. 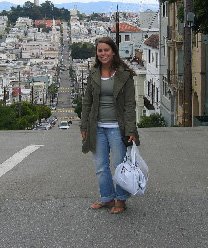 Asa: Our Swedish worker who came to to vacation and found herself working hard days in the hot sun. She always had simple solutions for problems where solutions evaded the rest of us. She also had an incredible work ethic and only agreed to go swimming after we had accomplished what we could on the palapa. She just didn’t drink very much… puzzling. 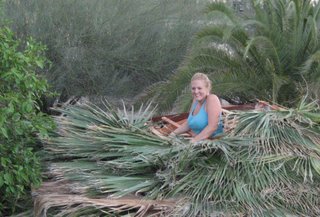 Megan: One of our most intense workers on the team who knows her craft and does it well. Megan served as a powerhouse during the construction of the roof in palm tree locations, faun collection and arrangement, and an ever eager attitude to accomplish the task. She also provided some invaluable tools to the project like her recently acquired choppers, her tall, super heavy, ladder, and ever present smile. Though she still got wigged out by the machetes. 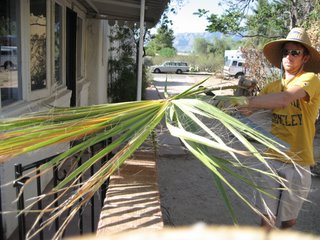 Me? I simply stood around while all my workers did the job right. Then I would periodically take pictures of myself pretending to do work. I didn’t know what I was doing – they did.