Didn’t really sleep the night before, too many things on ye olde mind. Finally getting some shut eye by 4:30 AM, the alarm cracked me awake at 5:45 AM. Megan knocked on the door the very next second and before I knew it I was walking across the tarmac and seat belting myself into the tiny jet plane headed for Houston, then onto Philly.

Philly, as far as I know is this mystical place. So mystical that I wasn’t really sure where it was, or at least had zero scope regarding the area it was in. This was the place our founding fathers signed documents, declared freedoms, and, as Chris noted, probably urinated in bushes outside their local pub. A glorious place indeed. But I had no idea that it was a hop away from New Jersey and a jump to New York and this new set of information, this new idea of proximity was amazing to me. It still kind of makes me uncomfortable, after all, it’s suppose to take you all day to drive the length of your state, or at least four hours to get out of it. Apparently the East Coast is excepted from this rule. Once I acclimated to that, the rest of the weekend was a breeze.. well sort of. 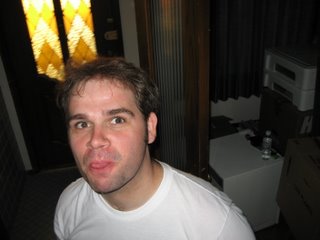 First stop into Philly was Chris’ place. His house is nestled in between two others, as all things that are nestled are, over on 17th where it sported a fancy front door with windows and nice solid hardwood floors, an opera singing neighbor, an old woman with a cute granddaughter neighbor, and some other regular type people about. The house was a pleasant and impressive three stories, I wish there were four because then we’d have been on the roof, but three would do just nicely and it did. All other Philly activities were similarly straightforward and simply enjoyable… to the fullest extent of the phrase.

I saw Chris’ TFA headquarters, we ate cheese steaks, ‘wizz-wit’, saw Jen, parked in the middle of the street, rode on the back of a moving truck, took subways across town and into New York, and drove to Atlantic City. The last two being of great importance. First, New York. 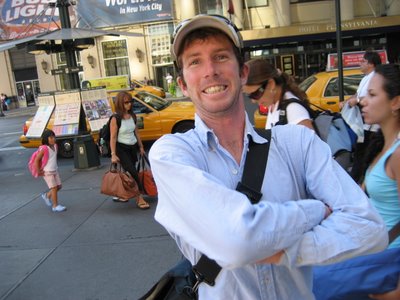 It was a first time for John being in the ‘Big Apple’ in the ‘Melting Pot’ the ‘City’… or what ever other name I could make up for it right now. Anyway, first time, so simply being there was neat, to say it in one word. New York is a city of substance. It’s still fake, like LA or Phoenix, or San Diego, or … I don’t know… but it’s got some substance to it underneath all the flashing lights, billboards, and photo opps. It’s neat to know that it was America’s port year’s ago, it was where American culture was, is, would always be (though now we know where it really is..) It was built on top of the poor by the rich and never seemed to stop. It is a mammoth of a city and every turn has a tale. It was neat. Cousin Mike gracious picked us up from Penn Station and drove us about the city for the morning, periodically allowing me to jump out of the car and gawk. We then met up with Jenette and had some lunch, after which we, Chris, Mike, and I, went for a walk from Times Square back to his place on 36th. It was a hike, but worth every step. The night emptied into tai food and beer and darts and then Mike left Chris and I to our devices, or vices. We walked up the street to the next bar, which so happened to be entertaining with Karaoke, we ordered scotch, three ice cubes, and enjoyed the music. 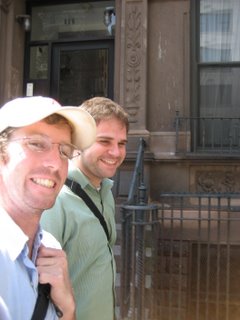 Once our feet were back outside walking down the street it was clear what the mission was: drink scotch at every bar we pass along the way until we can’t drink scotch no more. And so it was done. At bar number six there was a connect four game and Chris challenged the bar tender, rendering her with out a shirt (well, really she just flashed the bar, but who’s keeping track) as well as winning a couple of drinks for us and then it was over for me. I vaguely remember putting some of what I had drank away in the restroom and then doing a fair amount of stumbling, shouting, smashing, running, dancing, jumping, and the like. Chris and I fell asleep in the vacant apartment three floors down from Mike’s place on the wood floors, I’m sure glad they had a working toilet. Pancakes in the morning when we finally made it up the last three levels and then back on the train to Philly. It was quite the first day in New York, I think I covered my bases. 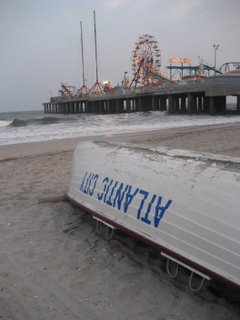 This is a much easier thing to relate. Two hours there by car. Twelve hours later I’m up $350, Chris is up $3,000. We eat a free steak dinner and drink free blue martini’s and we’re back in Philly with half an hour to spare before we need to catch my 5:30 AM flight back to Tucson. It was quite the first day in Atlantic City, I think I covered my bases. 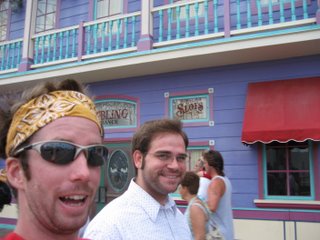 I ended up opting for a later flight out of philly and made another two hundred bucks, sat and watched a philly sunrise over the airport, as the planes yawned away and made it to a seat aboard flight something or another just in time to catch my body into a relaxed bit of sleep.

Back in Tucson I had one day to get everything I needed ready for classes, Paul moving in, and our ten days of sailing in California. So when Jon said he’d pick me up, it was clear there was no doubt that I would love to go rock climbing with him and Austin for the afternoon. What did I have to do instead?