Up early and makin’ pace for the break. Who would be in the water when we got there? We pulled into the cove, the surf was just starting to work. I put Will at the wheel and moved up to the bow with Tripp to look for a better anchorage than yesterday, something a little closer to the break. Again, we got distracted and should have been watching the charts, looking at depths, being smart about surf breaks and where they occur. Off the bow I watched kelp beneath the boat move in the surge, then we passed by some that had less vigor than the rest and my mind raced through possible reasons arriving at ROCK! About a quarter of a second before the boat came to a grinding halt with the horrid kathunk! Of keel on reef. We’d successfully done it again and this time was no different when presented to my heart and capillary responses. Tripp and I raced back to the cockpit where will was saying the depth was reading 60 feet atop the rock. Tripp took the helm and cranked the engine levers to full reverse, but the boat didn’t respond, to neutral to perhaps move off with the swell. Kicking me into the dinghy I started it’s 8 hp motor and swung it about to try and pull with it. Between swell, surge, and two different props, the boat eased off the reef and swung around and away from known danger. Stress was high and we put ourselves back to yesterday’s anchorage and before anchor was down, Will was heartily harassed by Andrew and then Pat, Tripp, Erica, quite the turn around from my reef incident. 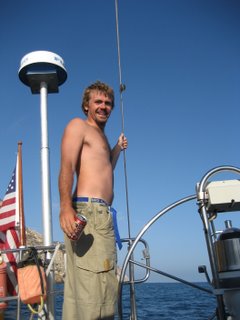 Soon after anchor touched down we had folks in the water all over. Will and Andrew paddled out, Erica and Pat went spear fishing, I (after Pat) checked out the keel and then paddled over for some surf with Tripp. It was a rough start, but was on it’s way up and the rest of the day all we did was play. Andrew and Will had some good stories about being ashore, while the rest of us just enjoyed no movement. Night came and Pat, Will, and Erica got in a evening glass off and we didn’t have the time to make it farther east to the next anchorage so we just drove back to the previous night’s still water.