– From we pushed further north hoping an arrival into would produce some surf. Past Point Dume we sailed past Point Laguna and were excited to see small crests off the shore. This of course, was a military base and wasn’t going to be a kosher place to surf, so we dropped anchor and everyone suited up. 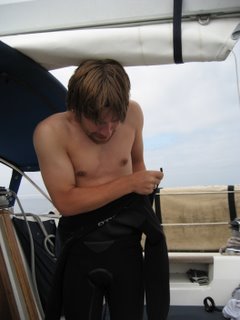 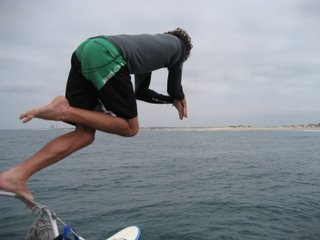 was dead and Rincon the same, we still had some time in the day and kept moving “north.” 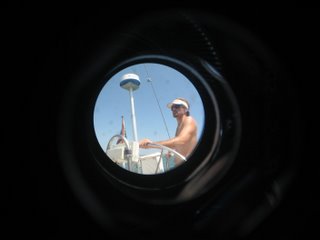 It was nice out. 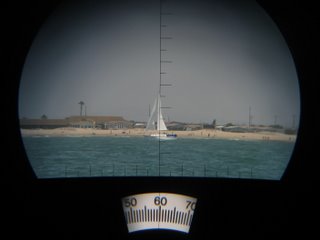 The sun set and the swell picked up. Finally pulling into a cove for shelter actually put us into a basin exposed directly to the wind and swell and we couldn’t foresee that being a comfortable night so I decided to push on. Becoming focused on the task of arrival I lost track of place and the charts.

Rounding one point we crossed a massive kelp bed which slowed our pace to a crawl until we got out of it. Uninterested in returning to the open seas and swell I made the decision to tack back close to shore and hug the coast line, hoping protection would be produced. I cut back across the kelp bed and again our pace slowed to molassas. The boat moving up and down in the swell more than forward. There was an ire feeling as we moved past the submerged forest and we felt the boat tugged upon. The swell turned into white caps and we were in direct line of a number of sizable waves, I turned the boat into them to avoid a roll and we crested the wave and dropped back down where the boat then stopped dead and heeled over some thirty degrees into the trough of the wave. The shock of immobility struck everyone and we were silent as I cranked the wheel to port trying to drive us into the coming wave, but we were stationary. The next wave crested into our beam and lifted us off the reef where I had enough time to point the boat ahead and then again port where we bumped off the reef a third time and eased back into the silent kelp. As my eyes scanned the calm twilight water ahead for other signs of danger, waves broke over the reef behind us and my teeth clenched together as I’d just made the first navigational mistake of the trip. Will poured over the chart with Pat and quickly pinpointed our location. We were just a couple miles east of off a point which maintained a large ‘foul’ off the coast, imbedded in kelp, less than a fathom deep. My eyes sharpened and they scanned the chart for other fouls and places of incident and we made a heading toward . We dropped the sails and I turned the wheel out to sea to create a hazard free approach to the harbor where we could enjoy safe haven for the night. Will got my jacket and head lamp and the boat was quiet across the black rolling ocean.

I got binoculars and soon zeroed in on the harbor entrance, a blinking red light, and turned toward it. The harbor was filled with blinking channel markers too and it was only when we were within fifty meters of the entrance that I was able to deduce the correct course in. I moved the lever down and the engine slowed to a crawl. The harbor was small and we moved directly to the harbor master’s dock where after taking issue with docking finally were able to get ropes cleated and cinched. Pat and I paid for a slip and we slept soundly that night.