– Awake early so we could get a head start on the crossing. 4:30 AM allowed us to see the sun rise on our way across the ocean. The wind picked up and a fish took to Pat’s line and gave a fight. This time the fish took the prize and got awayut the Second fish wasn’t so lucky, and we enjoyed Cuda Steaks later that night and fish beer for the next 3 days. 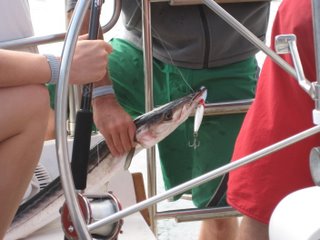 We were to Santa Cruz Island by mid-morning searching for the elusive on a coast-line full of caves around every bend. After an hour and some we gave up and moved to sail across the channel between and . The wind swell was larger in the channel and gusts would bat at our sails. We moved across with a slow steady consistency. We turned down wind at and the boat took even more wind into it’s sails, trying to move on a reach, the wind kept at us and the boat heeled over out of my comfort level. Tripp took the helm and the boat kicked out of the water at 35 degrees. Tripp dropped off and it was clear we’d exited his comfort level at that point. We dropped sail and motored through the cove and found a tiny protected anchorage where we tucked the boat in less than two fathoms of water on a double anchor and took a breather. It was time for some surf. 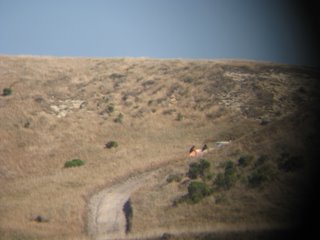