Everyone Smiles When There’s Surf

We pulled up anchor early, earlier than bright and early, as was customary on this trip. Within 5 minutes of waking the engine was on and we were rolling. We brought the boat around the South Eastern tip of the island and examined yesterdayâ€™s surf break. Bleak, we turned East and ate oat meal. The boat made a steady cross to in no time, but it took time. To keep our selves busy while we didnâ€™t have sails up we looked at things through binoculars, macerated the holding tank into the ocean and watched the brown muck pour out the back of the boat, and stared at the tip of the fishing rod as it bounced up and down with the swell, waiting for the click-click-click of the reel meaning â€œFISH!â€ The day started up 2 hours after we were moving and the sun began to warm up the deck and our backs. Soon we were wide awake and becoming more and more energetic glued to the coastâ€™s every intricacy trying to find indications of a peeling break. Passing through one small channel between the big and itâ€™s companion island about the size of a small pond our depth sounder read an alarming 6 feet and for about 10 minutes we were on edge and looking for any sign of reef, but none was found and none was run aground. We put up sails and made an attempt to move with the wind to try and ease our boredom and rid the space of engine noise and the boat came to a stand still and progress across the island was nil. We moved so slowly that Erica jumped off the boat and we all quickly learned that regardless of land speed, current can move at a quite rapid rate. She floated past the boat so fast no one really understood what was happening and by the time we did, our rescue line compared nothing to the distance she had between us. Encouraging her to swim, then to swim harder, we finally put the kayak into the water and pat made the rescue paddle and picked her up and followed it up with an amazing paddle up current to catch up with the boat. All members back onboard safely, we only had one more overboard incident the remainder of the trip. We were passing another cruising sail boat with boards along side their hull and I, in pirate garb, leaped from the bow toward their boat in an attempt to intimidate them out of the location of secret surf spots. It was to no avail and I was easily able to get to the back of the boat before it left me for the sharks in the sea. Half an hour later we arrived at the only consistent surf break the entire trip. 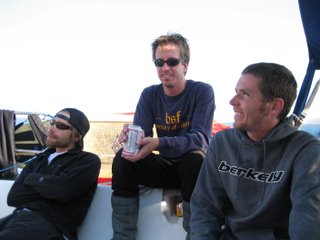 We made anchor and the whole crew was suited up within 5 minutes and at the break within 10. A small and short ride was enough to evoke hoots and smiles all around. The water had to turn cold and the night soon approaching before we would even consider leaving the break for an . Tomorrow weâ€™d return in hopes of more/better surf. Our anchorage was tight and the anchor line very lose, I became paranoid of our positioning, but after an hour still I was comfortable and let it go. The night gave us the best stars of the whole trip and a meteor shower made the chilled sea air that much more bearable. Our anchorage was almost still water and sleep was solid.