I unloaded it into my garage. At the time this was a very empty space and the organ sat right at the entrance like any glorious addition to a household should be presented, free to be seen by anyone who might duck in. HA! not here.. but hey, I felt better about myself.

This puppy was dirty. I never got a good understanding on where it came from or how long it had been in storage but it seemed like the varnish was actually made of clay. As I explored the properties of this ancient church rocker I took with me a small rag and after only several inches of bushwhacking, my morsel of rag had no chance of color retention before the end of my trek through the apparent bowels of this machine, I had to double back twice to renew the strength in my dust abatement program and finally discovered a set of screws and as all tinkerers know, you NEVER overlook screws and the secrets they hold together.
From the sky came the cold grey American Forged Steel of interchangeable driverbits, with the purity of lovemaking screw and driver became one and with the thrill of an Audi transmission the two moved. Counter-clockwise until the screw lifted, tapered, and released it’s noble grip, finally giving up all mechanical advantage in the end, still, generic, lying at the base of my organ. I felt as if I had plucked this fish from the sea and watched as it lay gasping for air until it ceased to pulse, alone, cold, dead. And I without grief, my only thoughts of where I would put the next one as it too would gasp and then lay cold, and when I had to many, where then would I hide my fish. I should get a bucket. So I did.*
With a number of screws out and perhaps one panel off, I was thrilled. Thrilled with my new gift to myself, thrilled with my new project, mostly thrilled with myself for acquiring it and being that much more amazing for having it. I closed up shop for the night and quietly waited for my roommate, Sean, to get home so I could gloat and share my grand plans for the rebuild, but mostly just gloat. 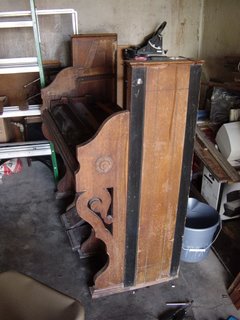 *I apologize for my extensive pause and seemingly out of control detailing of the extraction of the first screw.