I couldn’t sleep that night.

The first board had left the image of the tail for the next board, a concave tail that struck me as an interesting design. I left it, abandoning our initial idea for two short rounded boards. I traced , straddled, and cut the second nose and within half an hour I had a second blank in my hand. Setting the belt sander between saw horses I was able to lock it on and work it like a table grinder. Starting with the new blank, as the #1 board was smoothed the night before, I worked the board down and brought the nose and tail into near perfection.

Will arrived just as I was finishing.

With will in agreement, I pulled the pencil across the remainder of the wood and gave the image of the ‘longboard’ tail some substance: a classic pin tail. This time with Will available to hold the board I didn’t have to be so precarious with my positioning as we parturitioned the board into the world. After it was sanded it was quite difficult to restrain the degree to which I wanted to giggle. I might have let some slip.

Now we were serious. Now we needed hardware, we needed sealant, we needed a better idea of what was next. 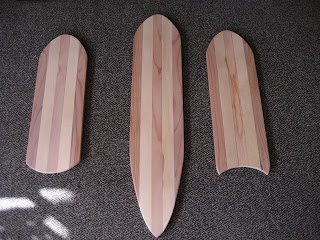