As I travel, it’s often difficult to open a computer to write, and a
writing in a journal seems to trap stories into a non-digital form and
personalize them so to make sharing them a bit more awkward than
desired, so often I compose on my phone. With a Qwerty keyboard and
email feasibility, most often it proves to be quite efficient.
However, due to aspects of my life which don’t get the kind of
meditation and karma they perhaps should, every so often an email
leaves my phone and never reaches home, lost forever in the digital
post office. Perhaps someday I’ll get all the letters I’ve lost.
Most recently the ether stole from me a four page composition slated
for this space, much of which I’ve tried to recreate. Yet, as we are
all aware, such thoughts, sentence structures, and word choices cannot
be replicated and for this I feel as if someone has stole my journal,
stripped from me my story only to discard it themselves. So, I warn
you reader, be careful of how you write, books can be swiped but data
can be lost. Back up your precious words, secure you thoughts, be
weary of the treachery within the vacuum. But loss is never total, so
in that respect, here’s my second go at it. 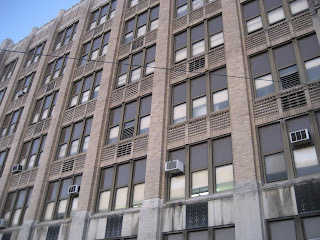 Trash blew all over the street, all over the streets. It made it
difficult to distinguish between each block. Typically a tall tree,
brightly colored house, or shop front could be used in a neighborhood
as a navigational landmark. Yet here the red-grey of the buildings
served as a camouflage, limiting the landscape to psudo-duo-tone,
black from solidified sludge, liquid garbage, and grey from the fresh
layer of newspaper, food-wrapper, and dull sky. In that respect, I
knew where not to step as I got off the subway. The next morning, the
sky was big and blue, the streets were still full of garbage, but at
least you could feel good about it as the sun licked over the sooty
rooftops.
Philadelphia held for me the perspective of Chicago, New York, and
Washington D.C. suburbs were suppose to, as far as I thought I was
suppose to know. Perhaps it was because my home-stay was living in a
harder neighborhood that the individuals I’d stayed with in the other
cities, or perhaps it really was the amalgamation of evils. Who
knows, though I imagine it to be the former.
The following morning was my first day of school, and as it turns out
my last day because I was just visiting and would be leaving soon
after, but we’ll over look that fact and imagine that my impression’s
roots reach deeper. The school was a five story monument. A massive
cube, clearly built in the early 1900’s. While in good shape, the
exterior said something regarding the upkeep of the interior. In
general most schools have similar physical ailments serving as an
ineffectual teaching tool and not a detrimental one. Our room, a
center of math, was kindly decorated with posters of mathematical
titles such as “Math of Africa,” “World Figures,” and “Math.” The
last one my personal favorite, a simplistic tribute to math, probably
a vain attempt to convince some of the students that the concept
actually exists and isn’t just another government conspiracy. Along
the front wall were several white boards as well as one along the side
wall. The other side wall held a cork board, which in turn held some
of the posters. The back wall secured eight neatly spaced windows,
each covered with a roller-paper window shade, fragile and antique,
but effective and in good shape. The window shades seemed to serve as
a regal connection to the past, to an era of astuteness and academic
vigor. Fortunately I spent a great deal time enjoying the windows and
their dressings because the wall they stood in was the anthesis of
their civility. Peeling paint was the crown moulding as cracked and
shattered plaster the base board. A large waste pipe moved vertically
from floor to ceiling and was covered in a rat nest of insulation in
turn covered with graffiti and gum. A industrial steel flange
connected it to the floor and a large ragged gap allowed it to exit
upward into oblivion. Ceiling tiles surrounding it where various
shades of yellow. The desks, independent of their chairs, where in
reasonable shape and, due to strict enforcement, where in neat two by
two blocks about the room. Portions of the room, if focused on, could
reminded anyone of a modern university classroom, with order,
cleanliness, modernity, efficiency. While other portions could be
representative of a condemned factory. No light without darkness,
right?

These aren’t the real problems of social education, however. As with
all things it wasn’t until I began to listen and talk with students
that the issues began to show themselves. In these classes the
students were, in general, participatory. They understood authority,
acknowledge work, and made decisions to avoid it the best they could –
it’s high school. Each had their own personal life which contributed
significantly to their excuses and were no different from the affluent
excuses of college students.

The potency of the problem struck me while talking with some of the
instructors while at school, became quite evident while sitting down
for a beer with a couple teachers later that day, and culminated with
a short talk with one of the students while at a subway stop. In each
case it was evident that failures occurred within the system. Blame
couldn’t be attributed to family life, or street problems. Teachers
simply did not exist, those that existed did not teach, and those who
taught were pressured by administration to curb their enthusiasm.
Students were eager to share. They were enthusiastic, as any 16 year
old is, to discuss the important things in life, to fall in love, to
hate authority, to sleep forever. The sad sickening failure is when
the school doesn’t have a spanish teacher or three math teachers. The
failure is students who get credit for taking a spanish class in which
a monitor, most likely an underworked administrator, takes roll and
then for the remainder of the hour has students go to sleep or listen
to music to pass the time. The failure is the social indoctrination
that educators are only those who have a formal declaration of study
with honors from some self justified institution of corporatocracy.
The failure is placement organizations serving as the last line of
educational defense rejecting enthusiastic applicants in order to
maintain a sense of privilege for those involved; yes you,
TeachForAmeria, you corporate whore of social sickness. Why is this
problem systemic? Where is the root? Is it a conspiracy to fill deep
pockets of private school deans and provide a sense of social control
for donors and board members? That seems a bit to much crazy for my
coffee, but clearly there is a disconnect of social responsibility.
Even within a successful classroom that battle for social inequity
begins with the encouragement of successful students to change schools
instead of asking students to stay local and provide peer
encouragement and support to make up for the failure of the
instructors. ….And so, for now, I will leave it for a bit… but be
weary of my wrath, oh ye who fail me and mine.