5 AM rolled by without anyone noticing. Then 5:30. Then four minutes later I woke up in a mild panic. I was suppose to be ready at 5:20 and I wasn’t. I paced a bit, looked out the window into the black night. Subtle porch lights created weak shadows across the street, otherwise there was nothing to see or hear in the cold morning. I picked up my phone and dialed Patrick to apologize for not being ready. He assured me they’d be right there. They too were late. I was off the hook.

I rushed my pants on (thermals under jeans) picked up a number of top layers; thermals, shit, sweatshirt, outer coat. In my panic I couldn’t find my stocking cap and opted for the base ball cap over nothing at all. Next to my knit cap was the pair of gloves that I would have picked up had I been thorough. Lights rolled up the driveway and I kicked my body into gear. I rushed outside and picked up pole and effects and shoved them into my backpack and hopped into the truck with Patrick, Dalton, and Lava.

About an hour later we pulled off the highway next to another car at the top of Rose Canyon Reservoir. “Damn, he’s got a bike.” Pat said, “We won’t be the first lines in the water.” We exchanged a cordial greeting and then he rode down the hill, quite quickly I imagine. We slung our packs and began the walk down. It’s about a mile from highway to lake and the downhill made it easy and quick, but it was COLD. Bitter cold. Tucson was cold, my guess was 35′ or 38′ F. Up here it had to be 28′ F. The fabric on my jeans would stiffen if I stopped for a moment and let them cool. So the walk did great things for keeping me warm. I think I would have kept walking past the lake in the name of warmth had I not been with other people.

As soon as we arrived at the lake the frustrating feeling of defeat struck me. The cold air pierced my hands so badly I couldn’t do more than five minutes of work before needing to put them into my armpits to quell the pain. All the while Dalton began setting up his gear and Patrick, some sort of fishing guru, tossed lines in the water and pulled fish out like they were attached to his line. I had much to learn about this fishing business.

I finally got enough stamina to get my pole together with the reel backwards, line missing loops, and loose knots. Ready for a fly I looked into my bag, a couple of donuts and half a bottle of orange juice. I raced through my memory of my rushed morning and stopped my brain just in time to keep from recounting the awful mistake. Embarrassed, I asked Pat if I could borrow a fly and he graciously obliged. I fixed my reel, re-strung my line, and tried to tie on tight Pat’s loner dry fly. Due to my loss of dexterity I had to grab the fly with the forceps and then cut a number of small knots off my line. Between bungling with the rod, line, fly, and managing what little use I had with my hands a sudden Plop! stopped all progress. Fly and forceps dropped into the water. The cold, still, bitter water. Just on the other side of this foot high wall at the water’s edge, through the arrogant amber water a shiny set of forceps pleadingly held an invisible dry fly at a depth of eight inches. I grumbled, but then bit my tongue and dipped my hand down to pull it out and set it on the concrete as I plunged my freezing wet hand into my pocket to rewarm. Maybe seven minutes later I was ready to work again and in another four minutes had the fly tied on and was ready to fish – I thought.

Walking down the path another three meters to distance myself from injuring others, I pulled some line out to cast and dropped the fly in the water. Again it hit with a significant Ploop! unlike the traditional lay of a dry fly on water, this little guy hit with force, propelled underwater and then bounced right up to the surface. I evaluated it with vague curiosity and frost-frigid mental frustration and then called over to Pat. “Is it unnatural looking to fish if my fly is frozen?” I suppose I expected his laugh and response of ‘probably.’ I then put the pole down to warm up my hands and walked over to Dalton. He was struggling with his line. It wouldn’t travel off his pole. Each of the loops had frozen over, solid. I didn’t feel so bad about my fly anymore. He chipped the ice off with his fingers as I warmed mine in my pockets.

I returned to my rod and proceeded to cast directly into the tree above my head. I took another ten minute break. I climbed the tree to try and detach my line. I climbed back down the tree and took another ten minute warm up. I tugged on my line. One, two, three… the fly let go and came down. I reeled my line in and moved down the shore. I took another break. My hands hurt something awful. Sharp pain in each finger, a numbness across the back and on the tips of my fingers. I walked over to the small dock on the reservoir, it was covered in ice. I was glad to have thick socks on under my heavy boots. I watched as Pat and Dalton strung their fish. At one point, after Dalton untied a knot he had in his line he pulled his hook out of the water where it dangled to find a fish hooked and ready for the net. It was that easy for these guys. I took another break.

Patrick moved on to a point on the shore near the dam and Dalton walked over to stand on the small dam. I stayed on the dock, in the sun, warming, and finally getting the energy to cast. Patrick would call over some tips and I would respond until my subconscious returned me to old habits and Patrick would call over again and critique. Tic-Toc. Tic-Toc. Dalton fell in the water, fell off a fence, caught more fish. I was learning. 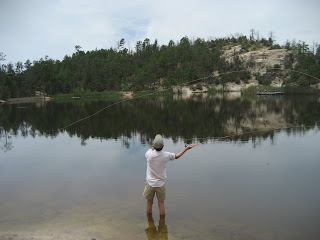 After a bit of this I packed things up and walked around the lake, where Pat and Dalton had now moved to, in order to do some observation of the ‘pros.’ I was hoping to see a what the line does when a fish ‘bites’ and how Pat or Dalton control their line in order to both set the hook and reel the fish in. Sitting and watching, Pat suggested I fish just a couple meters away from him to keep practicing. So I put my line in the water a couple times trying to mimic the man. Dropping the line in a spot a couple times then changing location after no bites, then again to another spot.

I tossed my line out and began to manage the length of line I had at my feet. Subtly drawing my hook-side line I noticed the little ‘wiggle.’ Not more than half a second, and not more than a couple centimeters. My vision isn’t that good, some people see aliens, some people Jesus, I saw the wiggle and that was all. I tugged a bit and then looked for another wiggle to prove to myself I wasn’t crazy. The line tightened up again, but didn’t run. So I pulled a little more line in and it was snug. Snug? SNUG! I caught a fish! – keep your cool. “I caught a fish!” I mentioned to Pat, “Hey, I think I caught something,” and then I started to look at all the line I had out. With pole in the air, fish moving left to right, I had my left hand full of line and reeling it all in as calmly as possible so as to not snap or tangle line as Pat scrambled over with his net with much more apparent excitement than I. The pole wasn’t flexing or swinging, the sun was out, and the fish wasn’t taking line, so I assumed it was about the same size as the other fish those guys had caught earlier, about a six-inch rainbow. Then I saw it… WOW! “Look at that thing.” I said under my forced calm breathing. As it came closer it was evident this fish was no trivial catch, it was real! A real fish on my reel, ha-HA! Pat slid down to the water line with his net and eased the catch into the net and it was all set. I retrieved my hook and put the fish on the line, Lava went nuts. Fourteen, maybe Sixteen inches, it was a German Brown Trout. Ha! And so there it was, my first catch on the fly rod, and the first fish I’d caught on a line in a Very long time. Boy was I proud.

The sky was now full of light and sun, the rocks were warming up, the bites slowed down, and we finished fishing a couple hours later without much else action on any lines (Save Pat who always has action on his line). I threw line in the water like I’d been doing it for years. Dropping in a spot there, then in a spot over there, jumping over rocks and sharing my thoughts on where fish were biting with rocks, trees, and anyone who’d ask for my opinion or just pretend listen.

To add to my pride that day, my fish got a lot of attention from the other folks now on the lake. One fellow across the lake shouted across, “That a Trout?!” – “yep” – “You Catch that HERE?!” – “yep” – “How big is that guy, twelve, fourteen?!” – “yep” – “Geeze – Nice!” – “Thanks,” I replied as we walked back up the trail. Folks we passed walking back to the truck all gawked and to put the cherry on top a ranger pulled up at the truck on the highway and asked if we’d caught anything. I proudly pulled out the trout and he said, “Wow, don’t see many brown trout come out of that lake, hardly ever that size either.” That did it, filled my head, I was content. 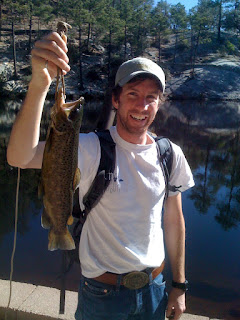 We drove home happy with the day’s business, planned the fish cook for the evening, and went our ways until then.