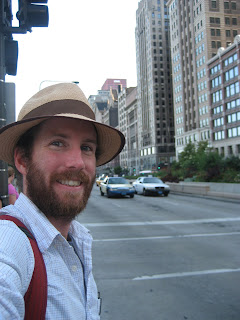 Chicago. No one is from this city, but everyone visits. Tourists everywhere, people everywhere, no one knows where to get a good meal. Even a hostess doesn’t hasn’t lived here, and she lives here. We stop at the library. There’s a wedding. We’d like to crash it, but the doorman is from here. He gives us a map. An intersection. A name. We walk. My legs feel great. Cooped up on the train is tough on the muscles. I had started a regiment of push-ups and pull-ups but nothing for the legs except a nip of scotch after dinner.

We find the bar, ____, it’s wonderful. Authentic german beer and food. Still no one is from here, nor does anyone eat the food, so its a blind order on beer and eats. Both are delicious. The bartender is swamped, would have hired me, but I have a train to catch. 10 PM we’re off to Albany. My Chicago walking buddy sits in a different car. I meet several ‘youths’ complaining about closed or broken toilets, slow and late trains, and their frustrations with the current administration of everybody and everything. I suggest they adhere to a strict pro-leisure tour curfew, but you can’t push a rope and you can’t quell the angst of a retiree. 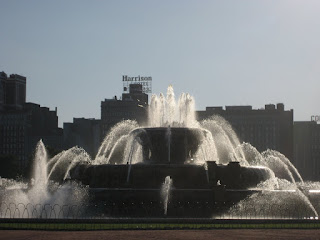 Their complaints are mostly in jest and I get to laugh with them. They pass along some good advice, the first of many. After a nice bit of monologuing from my seat mate regarding cancer, love, life, fortune, and laughter, I exchange a goodnight with the stranger and struggle into an uncomfortable series of naps throughout the night. Breakfast leaves the seat next to me vacant so I catch a bit of wonderful rest. A good morning wakes me and sits me upright again and I excuse myself to the parlor car for the remainder of the ride.

Singin’ on The Train, and a New York Business Man.

He allows me to share his table. We converse. I listen. More advice. She draws my hat, I tell her about it. She listens. More advise. I listen. They share lunch and chocolate. I share the few remaining crumbs of Kiras ginger-zuchini bread, meager, but all I have. More from both parties. The conversation become a bit controversial, opinions appear. Silence. Lighter topics and then farewells.

The train had passed all of rural america which still exists. The Rio Grande, Antelope (or Gazelle something running along the tracks), Arkansas, Up-state New York. Great lakes and rivers, farm houses, towns without people and people without towns. Could have fished off the train there was so much water. All passed behind the tempered emergency exit beside our marked books and lunch scraps.

We’re in Albany. Change to the Boston Commuter. I write and read and watch a movie. The trees are big, dark, but not as handsome as some I’ve seen. We barrel along. The long ride is setting in. It’s dark, I eat a microwave pizza and have a can of ginger ale. My arms are ready. South Station. On the T. Off the T. At the Bar, one, two beers, two glasses of water for Chris and Julia. Asleep on their couch at last. Four days of sights and people and thoughts. I’ve arrived safely and soundly with much gained. Boston.