Easter Day – We´re still on the farm, la finca, but Yesterday morning we started the day milking cows – a good wholesome farm activity – but caught a ride into Vilcabamba to have some yogurt and use the Internet later that day and then stayed the night. So we´re in Vilcabamba now. There is an amazing Internet cafe here. The computers are situated atop a terrace where you look over the entire valley of youth and the town back droped by the lucious green hills, challenged only by blood red exposed cornis´where landslides from over saturated earth cut through mother tiera, ploughing timber and stone into the gully´s below, which then roll back into the mountains shrouded by an airy mist that hangs for most of the day. Because of the day church bells ring every half hour and echo off the adobe walls of every building in town while chickens and burros champion each other´s wild call. This is Vilcabamba. 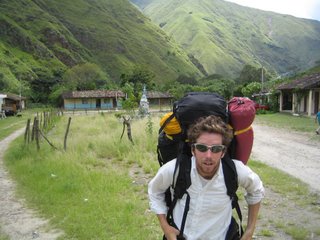 Elsewhere in the hills lies the small town of Tuminuma, a 30 min buss ride and one dollar fare. Where today at 3 we´ll go to Mass for Easter and for the Batism of one of the children of Andres, a local who comes to work with us on the farm, who Tina will be God Mother of. From this two tienda town with ice cream and a shop keeper named Maria who´s smile is delightful every time I ask for a two cold Fantas, we walk over a bridge, up river, and 30 min into the Churisco valley passing corn, cows, coffee, fruit, and fences, finally arriving at the hammock where I spend most of my time because we haven´t been working a whole lot.. unfortunately, but I have been writing, so that´s good… I suppose. The owner, Tina, isn´t very demanding of us and has only been on the farm for about 4 nights out of our two week stay thus far leading Jon and I to refer to the farm as ¨ours.¨ Thusly, I´ve taken up the sport of reading. I brought along a book ¨Tesla,¨ but our farm came fully equipped with a library of sorts, so i´ve begun to peruse and charge through some of the texts, easy ones to start with – but defiantly good ones. I finished Anthem one day and then Into The Wild the next. Though Anthem encouraged me to read more Ayn Rand, Into The Wild was a reflection of my silly quest for adventure and the trials of attaining that adventure and thrill. I then passed the book over to Jon and he finished it just today. (for any of you who´ve read into the wild, don’t be afraid, we’re taking precautions and using our noggin – for those of you who haven´t read it, do). Yesterday I picked up Kon-Tiki at the local book exchange where we exchanged ´dollar bills´ for a book and some peanut butter cookies. They were delicious. So far so good with Kon-Tiki – hopefully it lasts me longer than 3 days.

Plans to travel on. On our walk out of the picturesque Churisco Valley that hides our quaint little plot of fruit trees, Jon and I noticed that our Ecuadorian adventure is about half over and it´s time to get going and see more of the country. Thus we think at the end of this week, after we get something done on the farm, whether that is building a bridge, an outhouse, bamboo bed, or all of the above, and we enjoy some of Han´s, our German farm-mate, home brewed cane sugar wine. Apparently it tastes like Chery after a number of months. We think we´re going to head north, as heading south would lead us to the customs booth of Peru, toward Cuenca… and then up into Quito, with possible stops along the way, by the following week. From Quito we´d head back toward the cost to see some of the tropical coastline and do some more surfing before returning south to Guayaquil for our return flight.