Sitting in the office Wednesday afternoon, I was watching Los Super Campeones. Matthew approached me and asked if I wanted to truck up to Erdos on Thursday to deliver some books to a school with him and some other Aston staff. I thought it sounded fun and agreed. He then informed me we’d be leaving that evening as soon as I was done with class. I anticipated I was now obligated to something quite complex, but interesting. This was going to be a long day. 26 hours after leaving Hohhot, we arrived back home and I went immediately into trying to cut film and filter through the photos.

We took a traveling bus out to Erdos (know also as Dongsheng, 东胜) were we arrived at about 12 AM on the 7th. We slept hard and woke up to cold showers and a meager breakfast, but still we were quite excited. We made a a quick stop and a tour of the Erdos Aston school and then the bus out to the school pulled up. A slick looking mini bus, with plenty of seating for all of us. Everyone sat down and we got the wheels rolling. Stopping a couple of times to pick up various members of media, TV, Radio, and Paper. An interesting and convoluted 4 hours later we arrived at the Ma Chang Hao primary school in the Erdos Da Qi district. The site was dusty, dry, and reminded me of the United States South West and Northern Mexico. I really wanted to surf, telling the Erdos staff that where I was from looked exactly like this, except on the other side of that little hill there is the beautiful blue ocean. I kind of got a little dizzy.

With our first looks the school seemed desolate and barren. A large empty court yard bisected with a small building and a couple of trees poking through the bricks. but then it occurred to me that campuses are designed to fit people, not empty space, so I suspended my judgements until a more appropriate time. After a bit of generic wandering we were ushered into a small cafeteria where we enjoyed a full, delicious, and hearty meal with the staff of the school. And quickly there after began work preparing for the ‘presentation.’

With a bus load of folks, things are done quickly, but sometimes a bit hastily. I think we moved chars in and out of the library 4 times. Thankfully they were light chairs and we needed the exercise. A bit of cleaning, some decorations, the temporary removal of a coal-burning central heating unit and some table cloths put the room right into order. Now the sun was beating down and I visions of a quick session in the imaginary swell frequently fogged my mind. I sat down and drank some water.

Once we were ready, someone said the word and someone else acted on it and magically all the kids appeared, dutifully filling the vacuum of the courtyard and satisfying my need for judgement. This place was alright.

The kids then all lined up, a short speech was made, mostly for the press, and then we passed books out like it was candy, and the kids took them like it was money! They grabbed at the offerings and shouted with excitement, big smiles abounded. I was astonished. Probably because I couldn’t read the Chinese texts they had received and didn’t know about the awesome characters which built this culture. Clearly there was something I was missing. But, yeah, I mean, books are cool.

After the ceremony, and when all the books were gone, we all filled the small library and passed books back and forth and around and around. I think this library thing was going to work. After a bit of time we pulled out a flat and bald basket ball and enticed a good chunk of kids out to the dirt basketball court for some good wholesome football. About an hour later, it was time to take some photos and then get on the road.

While our first impressions were of timid foreign children, our last impressions were of enthusiastic, friendly, neighbors capable of being anyone or anyplace in the world. I relished in the fact that once again after only a short time all impressions of difference melts away and all I’m left with is pieces of individual characters associated with great moments in time and interesting places that look remarkably like home.

In short… watch the video.

First Round of tests for the semester.
The reason I hate school is now.

Found a very nice happy person in these last few weeks and that is a great addition to my day.
The reason I like people is her.

A recent move of my organ from the garage to my living room has reinspired restoration and along with it chronicals of my journy thus far, followed by my journey in the future.. I’m all about the future. Similar to my Tucson Palapa Build, this one runs as my Tucson Organ Build. Check it out, then come over and help me! please?
The reason I workhard is this.

10 hours of travel and three buses over, we´re off the farm (the farthest south we shall go on this journey) and in the third largest city in Ecuador, Cuenca. After almost three weeks of lying about, gardening, hiking, and building a bridge, we´re ready for some new sites and sounds and panama hats!

* Fell a tree – stuck myself in the head with a 4 inch spine – head ache. Milked the cows – roped the cows – grabbed the bull by the horns – drew a diagram – made butter, buttermilk, sour cream, and cheese. Rode the horse – walked the horse – on the school bus – went to school – taught some English – drank with the local ´on duty´ police officer – taught more English – explained a Beatles song to 40 Ecuadorians – said the alphabet over and over again – Dos Jhons make a presence. Remembered my Boy Scout lashings – strained my back – finished the bridge. Ran out of gas – started cooking on open flame – rain – made more bread – salty bread – it´s hard tack – ´it IS nice to have a fire in the morning!**´. Packed up – cleaned up – enjoyed some cane wine with Hans – said good bye – off the farm.

The ride from Loja took us up into the southern highlands of Ecuador through rolling hills and had it not been for my ears consistent whining, the increase in altitude would have gone unnoticed. The countryside is an amalgamation of sights, smells, and sounds… I suppose such is any experience… just go with me on this one… For a bus ride it was remarkable. We passed pristine pastures, sheep, pine trees, adobe buildings next to wood sided ones next to piles of block, next to the beginnings of a new structure next to a pile of muck, workers roping cows and children chasing sheep. Every new valley had new sights and every climb out had new turns and exciting swerves and curves. ¨Gracias!¨ signaled the stop where we make a passenger drop. After 6 hours of travel we dipped into our last valley and saw only the lights of the large sprawling city. A cab ride from the bus depot to ´downtown´ via one ways, through narrow streets, and over cobblestone roads helped to make the city seem smaller than it really is. Consulting our Lonely Planet we identified a number of hostels and concluded we would do our own reviews. We soon dropped our things and went in search of some milk and Oreo cookies to accompany our television, separate mattress covered beds and quiet quarters, our reward for the long day of travel. With the church bells in the morning we woke up to the joy of the first left knobbed*** shower since leaving the states.

Nescafe and Jugo has got us ready for the day. The city is alive this morning.

** Jon spent the better part of 2 frustrated hours trying to get a decent fire going… we needed hot water for coffee! As soon as fire was indeed produced (and what a fire it was!) Tina (freshly arisen from bed) strolls up casually behind us and says “It IS nice to have a fire in the morning, isn´t it?” Like King Edward IV telling his lovely maid, Lucy, “It is nice to have serfs, isn´t it!” as he enjoyes his fresh cheese and turkey.

***look at your shower at home and tell me what the left one does. 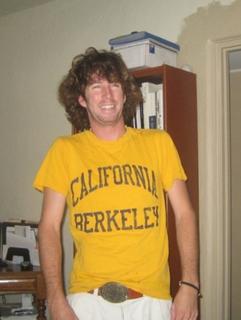 Friday, the week before I begin my 5th year at The University of Arizona. I’m taking the least number of units in my career so far, I’m an ASUA Club Advocate, and President of three clubs on campus. My game plan is to ace my classes, but we’ll see how that goes. So far, that’s been my game plan since I stated attending this school.

I’ve been thinking about getting a notebook computer for the last month. Last week I decided on one I liked. Today I bought it. Next, I get to pay it off through out the school year. I anticipate it will help greatly with my balance between home and school. I won’t be reliant on getting home for information. I’ll have it with me at school. Plus, my desktop is slowly becoming a beast of a machine that is failing. Fortunately my monitor is still working wonderfully and my laptop has DVI so I can connect the two quite easily. I look forward to being able to move away from staring into the corner when ever I work on the computer. YEAHH!

I think now I will move my computer into my room….