After dinner we enjoyed some beach time in the spirit of REM. I hadn´t been night swimming for quite some time and forgot how difficult it is to see the swell until you have a mouth full of water and you´re upside down. The killer part of it all was the presence of happy little bugs, or angry – I couldn´t tell. On my way out to the water I found a cool little glowing bug. I put it on my finger and watched it crawl all around all the while blinking away. Then once we got into the water it was like we were robots. In fact, I may still be of the belief that I´m a robot while under water. The little phosphorescence attached and glowed on your skin as you moved, it was quite the site. It´s amazing what characteristics animals develop, or are given to them by the almighty creator.. which ever way you think it should be.In earlier news I woke up after having some pretty odd and vivid dreams, quite unpleasant. I think it might be the drugs. I don´t know for sure, so I´m going to give them another week or until I wake up sweating. After I woke up this morning, we went to go take care of business with the balsa board and alas were hit with yet another road block on the journey to getting a board. I should let Jon tell the story from here.

But first let me tell you about this one time I went to Las Vegas right before I flew to Ecuador, and when I was in Vegas I spent $800, but didn´t realize it because the casinos got me so drunk that I start telling proverbs.

So today I went to the ATM to get the money so that I could pay this man and he could start shaping up my awesome balsa surfboard. But the silly ATM was holding out on me. ¨Your transaction has been declined. Please contact your financial institution for more information.¨ At least I think that´s what it said. Silly Spanish.

So I had my new friend The ATM print me up an account statement because in my previous job as a detective I learned to never leave a stone unturned. Sure enough, I found the problem. Zero dollars. Crazy huh? I thought so too. So that´s when I went to the internet cafe, logged onto my bank, and found the next piece of evidence: a string of ATM withdrawals and one debit purchase of [DOLLAR AMOUNT UNDISCLOSED] at [NAME OF STRIP JOINT UNDISCLOSED].

So, long story long, I don´t have a balsa board after all. :(

Anyway, so we spent the remainder of the day thinking about what was to be done about the balsa boards and our stay here in Montañita, thus far it´s been quite inconclusive.. but maybe we´ll go to Guayaquil tomorrow.. maybe.

After our deliberation for the day we got into the water, did some body surfing and then ventured over to where our Californian friends were staying and as it happened there was a soccer game going on just out side so I decided to strengthen foreign relations and sub myself in. It was a simple game, 3 one 3 however once I was in it quickly dissolved into 5 on 1. I held my own. I didn´t necessarly win, but I was definatly a winner and respected myself after a game full of maraculous saves, shots, jukes, and it´s very own share of injuries including but not limited to a skinned knee and rocks in the foot. After the game Jon took a photo of the team all together, including me, and it wasn´t until they hailed to me ¨Hasta Mañana!¨ and I commented to Jon what a tough bunch of folks they were that he informed me that they were all 5, 6, 7 and 8 year olds. I still think I´m cool. 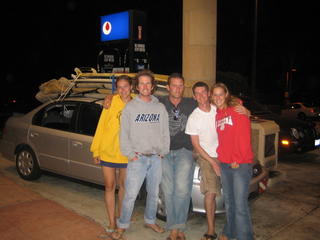 Whoooa, labor day weekend surf was out of control. Not so much the surf, in fact we were down at Scripps and the surf was quite mediocre, however the adventure was outrageous.

Into or beds by 3 AM the day we arrived we were up again by 6. Needless to say once we arrived at the beach in San Diego it was time for our mid morning nap. After a good deal of surfing and Frisbee Pazookies were in order for dinner and adventure ensued. Splitting into two teams we raced to BJ’s where the loosing team would be obligated to buy the winning team their round of Pazookies. Unfortunately, by not having a remarkably simple yet winning team name, my team lost and team Awesome won. Preceding the pazookies was a ride back to the beach via truck bed. Now, I’m aware of truck bed laws in CA, but my company was not familiar with them. But being in the minority and willing to take the risk that we wouldn’t run into a police officer during our 1.5 mile drive we all jumped into the bed and were on our way home. Not even a block later we found ourselves stopped on the side of the road with a genuine San Diego Police Officer, who so very graciously allowed us to exit the bed with a warning and some time to think of an alternate means to get home. Shuttling the rest of the group back to the other car via truck we soon had another ride home. Alas, leave it to genius to not have enough room for all of us in the second ride as well. So, in light of the recent law breakage I took refuge in the trunk as the rest of the crew cinched up in the back seat. Safe and sound we got back to the beach, packed up our things, loaded the car, and moved out to our next destination, the camp site (via one stop for liquor). In all it’s glory, our site was marked as “Property of The Regents of California” “No Fires, No Picnicking, etc. etc. “ though it never said anything about sleeping or camping. We decided to mix our selves some drinks (most of them quite bad curtsey of me) and then took a nice tour of the UCSD campus at 11:00 PM. We stopped to notice some of the local insects, including one scorpion half the size of my pinky fingernail, as well as climb about in some trees and atop buildings – all in good fun. We quickly came to find that some of the restrooms on campus were open, which allowed us to get some hot water on our faces which was a nice touch to the evening. Immediately following our sink showers we came to notices that other doors to this building were also open. Finding a latter leading to a hatch we were above the La Jolla playhouse in the catwalk – remarkable! Exploring further each door seemed to be open and as it turns out the entire playhouse was open for our entertainment! Upon being spooked by a noise we cut our exploration short and moved on, exploring a small hippy garden, some construction sites, and lastly the medical center where we found three rolley chairs and a whole course of ramps awaiting our races. Spending a good hour rolling the course, we were finally stopped by the loss of every single wheel on all the chairs, making them unrollable. Devastated we meandered back across campus to our grove of eucalypts trees, rolled out our bags and hit the sack. In the morning we were abruptly awoken by a dog about a foot away from our faces and a man saying, “you can’t be here, this is public property!” Though we knew what he meant, his words really made him look quite silly. We then jumped back into the car and cruised down to Scripps for another great day of beach, surf, sleep, and the like. The evening brought us again to BJ’s for some pazookie and some nice conversation with the waitress, who was actually from Tucson, where upon we revealed to her that we had slept in the trees the night before. My goal was for her to say “well, why don’t you come crash at my place with my 16 hot roommates.” But really all she said was “Why don’t you get a hotel room!?!” much to my dismay. Though, as it turned out we didn’t do either. After dinner we cruised back onto campus only to find the playhouse still open and ready for business. Exploring much deeper this time, it was clear that someone had goofed and not locked it up after the last show and no one was coming back till the work day, Tuesday. So we ran around the place, played with the piano, found their audio equipment closet – open and ready for business, turned lights on and off and finally found their green room with a fridge full of orange juice and beer and two couches. As sleepiness dawned on us, it was clear where we were sleeping; in the warm cozy security of the theater. We worked out plans to escape if surprised and then crashed till the morning when we casually woke up, used the dressing room bathrooms to clean up (they even had showers, though we didn’t use them) and then we were off north for some surfing at San Onofre. Upon arrival at San Onofre we found a group of surf goers and breakfast makers and managed to score a couple pancakes and eggs and even some passion fruit once we told them that we were essentially bums, sleeping in trees and trespassing. Charged up and ready to go we got one last surf session in for the day, returned the boards back home, had lunch with Mom, stopped by Becker and the Rainbow Factory and high tailed it back to Tucson.

All in all it was a fantastic weekend, full of good stories and confidence in our ability to really hobo it. 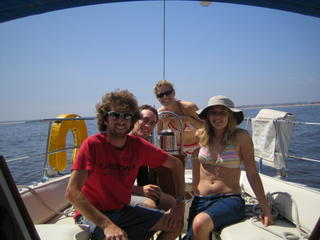 Last week I got to go out to California with a couple friends and teach folks how to surf and sail and enjoy beautiful California weather and beaches, including a short visit to Popa Bob’s (regardless of a wicked red tide). The first day included driving about collecting all our goods, surfboards, wetsuits, lunch and then settling our camp down at San Onofre’s Trail 4. The next day we woke up, drove over to Old Man’s and surfed till noon, then we drove up to New Port and sailed away on the 35 foot “Tara.”

T’was a nice boat. We stopped and anchored in front of Fisherman’s Cove and had Dan swim in to test the waters frigidity, he later recounted. “I hate you guys.” We then picked up anchor. Then we pulled the boat back into it’s slip and drove down to Laguna where we had a wonderful stew dinner. The third day we woke up and went down Trail 4 for some different surf. The swell was very clean, unfortunately, the water was a blood red and riddled with jelly fish, it made me think twice about doing back flips off my board, but I did catch 4 feet of air off the back of a wave, so that was fun. Day four we packed things up and drove back to Tucson. I like to think that everyone enjoyed the stay. We took a couple of pictures of Dan doing work and cursing under his breath and some of the different surf skills learned, including ‘toes on the nose,’ though my pupil is a little shaky up there, I think we can work on it.

Dan holding the anchor – I was talking to Andrew on the phone.

Dan still holding the anchor – I was enjoying the weather. J